Blog
You are here: Home1 / Most definitely I would recommend Joinery for All Seasons and have talked... 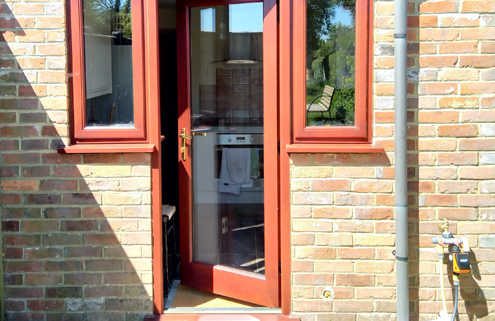 I live in a terraced two-up, two-down cottage built for farm-workers in the 19th century. It was done up about thirty years ago for rental, extended for a bathroom and a kitchen with double-glazed plastic windows fitted.

I wanted hardwood double-glazed windows in my house and having had a bad experience when the first one was done, I searched hard for a new supplier for the bedroom windows. I used google with various detailed searches until I found Joinery for All Seasons.

From the first visit by Daryl, their professionalism and craft knowledge has been evident throughout. He studied the existing hardwood window as a guide to my taste, sent a quote promptly and I was very happy to go ahead. I visited their workshop ahead of the installation which re-confirmed my good impressions of the company. They duly installed two bedroom windows just as I wanted them!

When it came to refitting my kitchen, I talked to Daryl about wanting to move the door and there was no problem at all. They would look after the building work, so I asked him to quote for the door, and three windows in the kitchen plus two other windows.

They were key to the re-fit of my kitchen and it was all scheduled around their work. They were on time and they have done a marvellous job. They were all friendly and careful just as they had been previously. It is a very special pleasure now to look out at my garden through my beautiful new door and windows which match all the rest of the house.

Most definitely I would recommend Joinery for All Seasons and have talked about them with friends and family.

I am delighted with our completed front door and window installation!

It’s been a pleasure to have Joinery For All Seasons work on the refurbishment...
Scroll to top

We are now on our annual summer holiday shutdown and return Monday 27th September, please email us through our website or leave a message on our answer phone and we will come back to you as soon as we return.