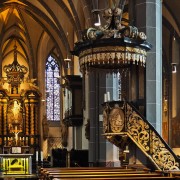 At Joinery For All Seasons, we aim to create high quality windows for your home.

Sainte-Chapelle was also known as Holy Chapel. It is a royal chapel in the Gothic style, located at Île de la Cité in the heart of Paris, France. The chapel was built by  King Louis IX between 1241 and 1248 in order to house the Holy Relics of the Passion. 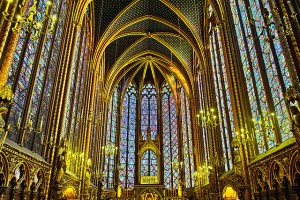 The Grossmünster symblolize the Romanesque style Protestant church in Zurich. It is well known as one of the four major churches in the city. The window is designed by Sigmar Polke in 2009.

The stained glass window was designed by Mucha during the early 1930s. It portrays a boy named St. Wenceslas with his grandmother, St. Ludmila in the centre and surrounded by the lives of Saints Cyril and Methodius who spread Christianity among the Slavs.

The skylight of the Palau de la Música Catalana features the stained-glass windows built in arches that line both sides of the main concert hall. It represents the sun and sky. 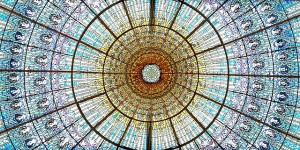 The church is located in the Sablon district in the historic centre of Brussels. It has been said the church was seen as inferior by the wealthy citizens of Brussels. It is characterized by its late Brabantine Gothic exterior and rich interior decoration including two Baroque chapels 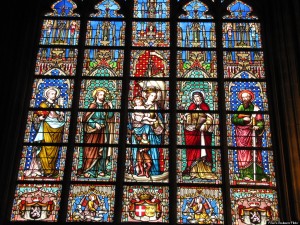